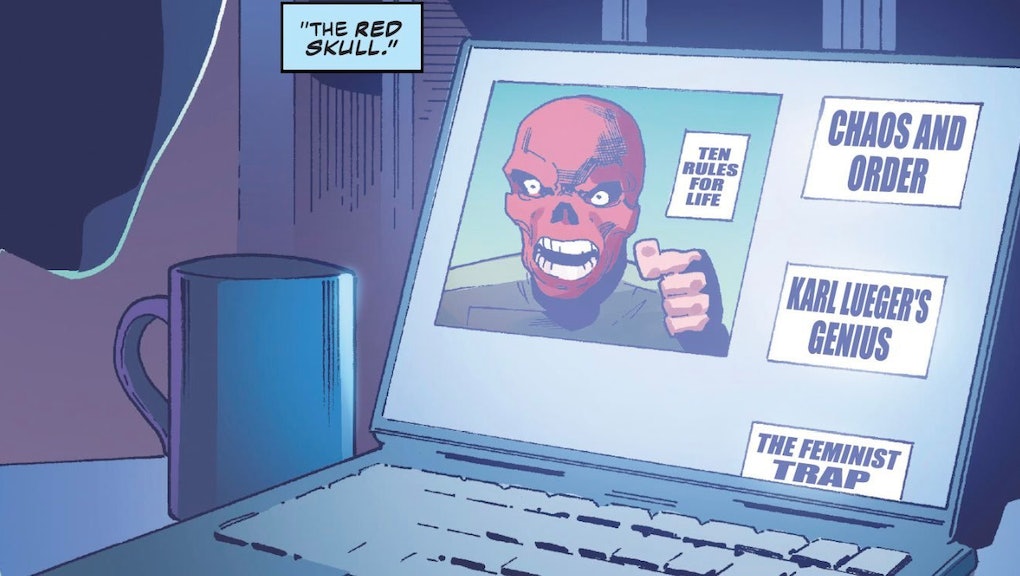 Controversial psychologist and right-wing celebrity Jordan Peterson feels personally attacked by the current run of Marvel's Captain America comic books. You see, Steve Rogers is battling his old Nazi foe the Red Skull in the issues, with the fascist villain spreading his rhetoric to disillusioned young men via viral online videos. Well, Peterson caught wind that the Big Bad parrots some of his own philosophies in the comics and threw a big old Twitter fit about it.

"Do I really live in a universe where Ta-Nehisi Coates has written a Captain American comic featuring a parody of my ideas as part of the philosophy of the arch villain Red Skull?” he wrote. Well, kind of, though Peterson is probably giving himself too much credit.

The conservative pundit was first alerted to the parallels between his rhetoric and that of the Red Skull when a Twitter user posted a panel from the comic and asked Peterson if anything looked familiar. The Nazi villain appears on a laptop screen alongside a title card reading, "Ten rules for life." Peterson, meanwhile, wrote a best-selling book titled 12 Rules for Life, targeted at young men who feel their privilege is being attacked. "What the hell?" Peterson tweeted in response to the parallels.

He also shared a series of panels from the same issue, where Captain America chats with a police detective whose brother was sucked into online extremism. “So lemme guess — your brother, he disappears onto the internet. And when he comes back out, he can’t stop talking about this new theory of the world and that theory comes from one man. The Red Skull," Cap says. “He tells them what they’ve always longed to hear. That they are secretly great. That the whole world is against them. That if they’re men, they’ll fight back. And bingo — that’s their purpose. That’s what they’ll live for. And that’s what they’ll die for.”

The exchange nails the seductive treachery of Peterson's rhetoric, but Cap could be talking about a whole slew of other fear-mongering conservative pundits, from Tucker Carlson and Alex Jones to Milo Yiannopoulos and Ben Shapiro. Coates probably drew on Peterson's philosophies while writing the Red Skull, but he's just a cog in the gargantuan machine that's so effective at radicalizing many angry young men on the internet these days.

As a recap, Peterson started off as a well-respected psychology professor. His notoriety blew up in 2016, when he publicly refused to call students by their preferred pronouns — an extreme reaction to Canadian legislation banning discrimination based on gender identity. This sort of inflammatory outrage became his hallmark, and his ability to provoke "social justice warriors" fueled his viral fame.

These days, Peterson is the patron saint of disillusioned white men, pushing the notion that diversity, feminism, and political correctness is a threat to their innate dominance. Conversely, Coates is an influential, progressive writer most widely known for making the case for reparations for Black Americans. Before Captain America, he wrote the Black Panther comics.