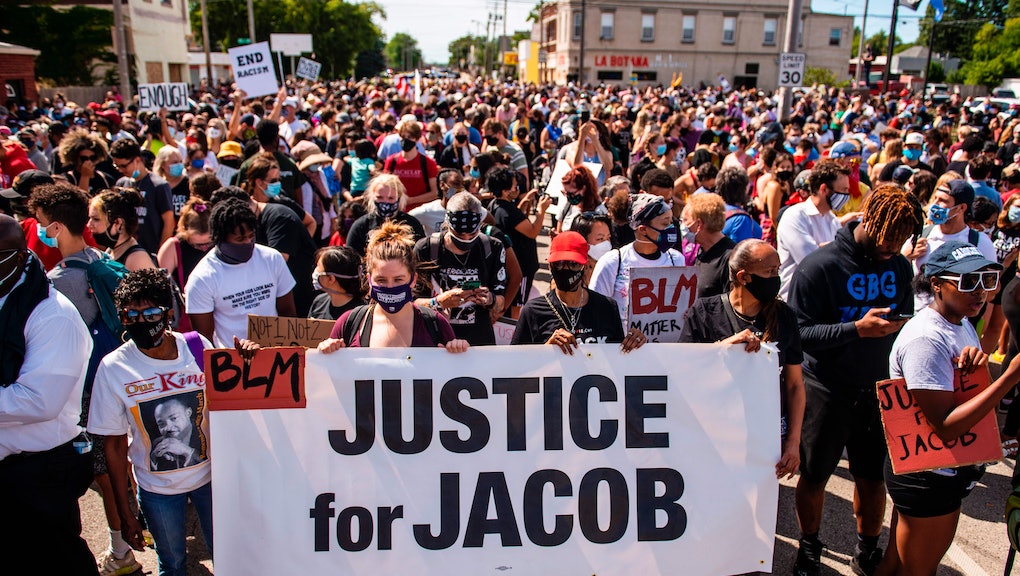 In August, police in Kenosha, Wisconsin shot and paralyzed Jacob Blake, an unarmed Black man. As citizens took to the streets to protest, far-right and white supremacist militia groups mobilized, encouraging supporters to show up armed and prepared to defend the community. The organizing efforts by these groups, which played a driving role in Kenosha's descent into violence, largely took place on Facebook. Now, victims of that turmoil are trying to hold the company to account. Four protestors, including the partner of one of the people killed by Kyle Rittenhouse, have filed a lawsuit against Facebook for its role in enabling the violence.

The 38-page complaint, which was filed Tuesday evening in Wisconsin federal court, alleges that Facebook "empowered right wing militias" and allowed them to "inflict extreme violence and deprive Plaintiffs and protestors of their rights.” In addition, it claims that Facebook acted negligently when it failed to take action against militia groups that were organizing on its platform. The lawsuit also accused alleged shooter Kyle Rittenhouse of taking part in what the plaintiffs call a "conspiracy to threaten and terrorize US Citizens."

Four participants in the late August protests are listed as plaintiffs in the case. Christopher McNeal, the lead plaintiff on the lawsuit, a Black man and resident of Kenosha for more than 22 years, claims to have been assaulted, harassed, and held at gunpoint by militia members. Hannah Gittings was the partner of Anthony Huber, a protester who was allegedly shot and killed by Rittenhouse while attempting to disarm the teenager after he had allegedly shot another person. Carmen Palmer, a Black woman who traveled from Milwaukee to Kenosha with her church group, was threatened by armed militia members and claims to have had the tires of the vehicle that she came in slashed by the violent group members. Nathan Peet, a resident of Kenosha for 14 years, was present when Rittenhouse allegedly shot his first victim in a parking lot.

“We removed the shooter’s Facebook and Instagram accounts and took action against organizations and content related to Kenosha," a spokesperson for Facebook tells Mic. "We have found no evidence that suggests the shooter followed the Kenosha Guard Page or that he was invited to the Event Page they organized.” The company has previously admitted that it failed to take action against armed and violent militia groups that used its platform to organize. Earlier this month, The Verge reported that multiple users attempted to report militia groups to Facebook in order to get pages and groups taken down, but the company failed to act. Facebook CEO Mark Zuckerberg called the inaction "largely an operational mistake," stating in a video that, "the contractors, the reviewers, who the initial complaints were funneled to, didn’t, basically didn’t pick this up."

This is not the first time that Facebook has faced legal action claiming the company's platform played a role in enabling violence. In 2015, the company was the subject of a class-action lawsuit that accused it of "incitement and encouragement of violence against Israelis." The company was also invoked in a 2017 lawsuit that sought to push white supremacists off of social media after the Unite the Right rally hosted in Charlottesville, Virginia brought together huge collections of hate groups and resulted in the death of an unarmed protester. Following that incident, Facebook vowed to "take down threats of physical harm" hosted on its platform. However, in the case of Kenosha, it deemed the militia groups organizing while using violent rhetoric and encouraging people to arm themselves to be "non-threatening."