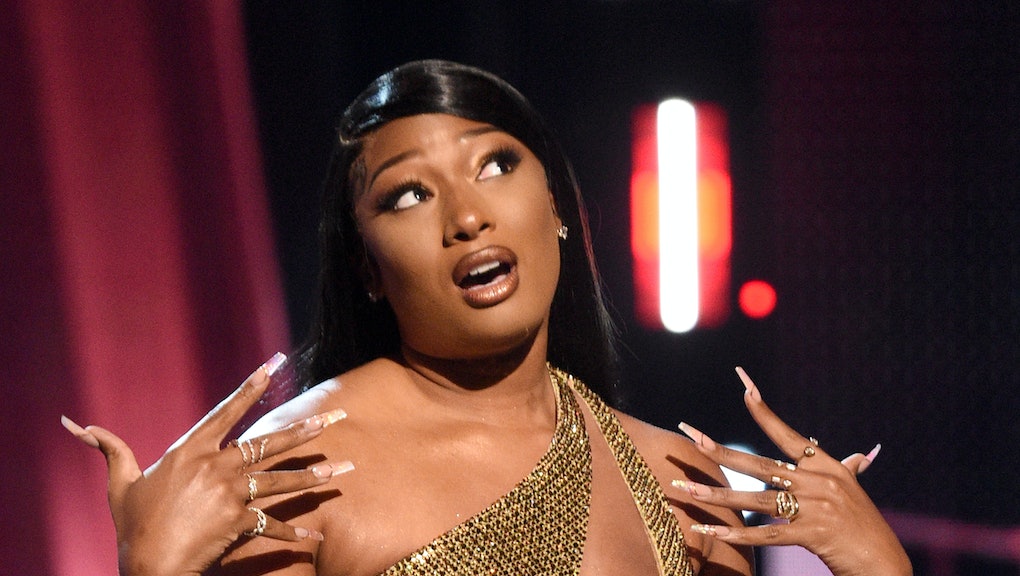 In late April, rapper and certified Hot Girl Megan Thee Stallion announced she was taking a well-deserved break. The last year had been a roller coaster, between the massive success of singles like "Savage" and "WAP," a violent assault that sent her to the hospital with bullets in her feet, and then a hopeful debut studio album Good News in the fall. Her whirlwind 12 months culminated in a trifecta of awards at the Grammys — Best Rap Song, Best Rap Performance and Best New Artist — plus a scintillating performance with Cardi B on the telecast.

So when Meg posted sci-fi images of herself in a regeneration tank and said she was "recharging" due to the "demands of the Hot Girl lifestyle," we were like yeah, makes sense. It sounds like she spent her downtime wining and dining somewhere abroad, to which we say treat yourself, you luminous diamond. But a month-and-change later, Meg is back, which she announced on June 6 with another CGI animated avatar of herself in recovery mode. Except now, her powers are restored to full strength. And she has a new single, "Thot Shit," out this Friday. Oh, and you can call her Tina... Ms. Snow if you're nasty.

It sounds like "Thot Shit" will echo Meg's other anthems celebrating female pleasure. All we know about the track thus far is that it "celebrates women unapologetically enjoying themselves, doing whatever they want, whenever they want, regardless of what the critics have to say," according to a press release. The album art features a trio of women in towering white platform heels standing over a man passed-out on a checkered tile floor. Since Good News, Meg has collaborated on singles with Ariana Grande and Doja Cat ("34+35"), Maroon 5 ("Beautiful Mistakes"), and Lil Baby ("On Me"), to name a few.