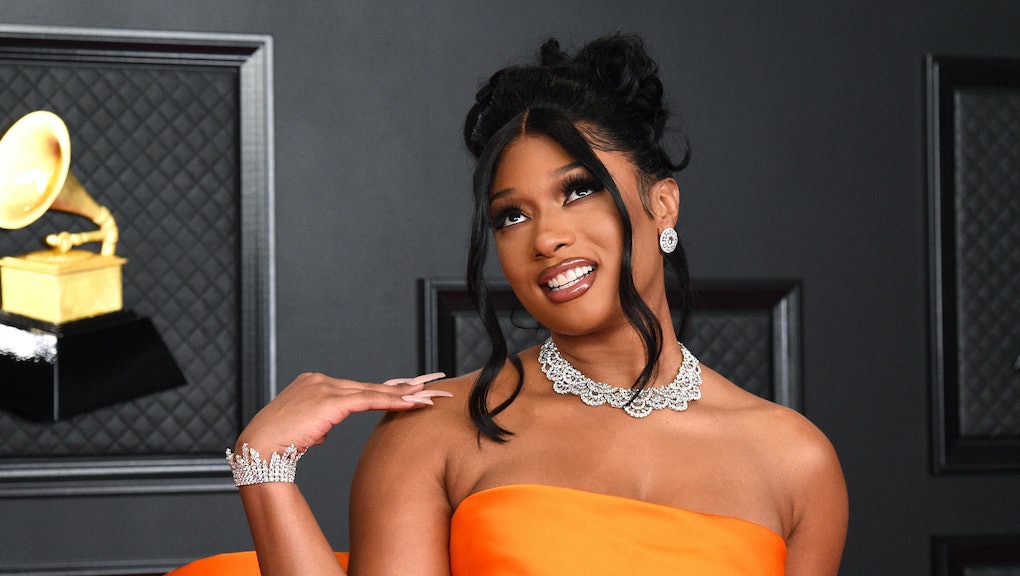 No Hot Girl has ever deserved the chance to rest and recharge more than Megan Thee Stallion. It’s honestly mind-boggling that her mega-hit “Savage” is barely a year old. The remix featuring Beyoncé dropped on April 29, 2020!

Flash forward 12 months, and the superstar is finally taking a well-earned break, which she announced on Instagram with a series of sci-fi images of herself in some sort of regeneration tank. (Famously an anime fan, Meg also posted a still to her story from Dragon Ball Z, picturing a character in a similar medical machine.)

Meg barely slowed down last year, even when she was grappling with the trauma of a violent assault that sent her to the hospital with bullets in her feet last July. (Tory Lanez was charged in the shooting by the Los Angeles County District Attorney's Office in October.) She teamed up with Cardi B on “WAP” in August, bagging the second number-one hit of her career just months after her first. Conservatives are still getting worked up about the song.

Then came a spot on Time’s list of the hundred most influential people in the world, followed by an acclaimed op-ed for The New York Times about the reality of being a Black woman in America. During her debut performance on Saturday Night Live in the fall, Thee Hot Girl used her platform to protest police brutality. And this was all before she even dropped her first full-length album, Good News, in November. When the Grammys rolled around in early 2021, Meg won Best New Artist and walked away with two other trophies, both for the "Savage” remix.

Whew! On top of everything else, Meg lost her mother and great-grandmother within months of each other in 2019, right before her career really took off. Flash forward a couple of years, and the rapper has a new boyfriend and four adorable pups. We hope Thee Hottie will go as hard on R&R as she does on her tracks.

If you’re concerned about missing Meg during her hiatus, don’t fret. "I'll be back when it's time,” she reassured fans on Twitter. They really won’t have that long to wait: she’s scheduled to perform at Rolling Loud Miami in July and Bonnaroo in September.