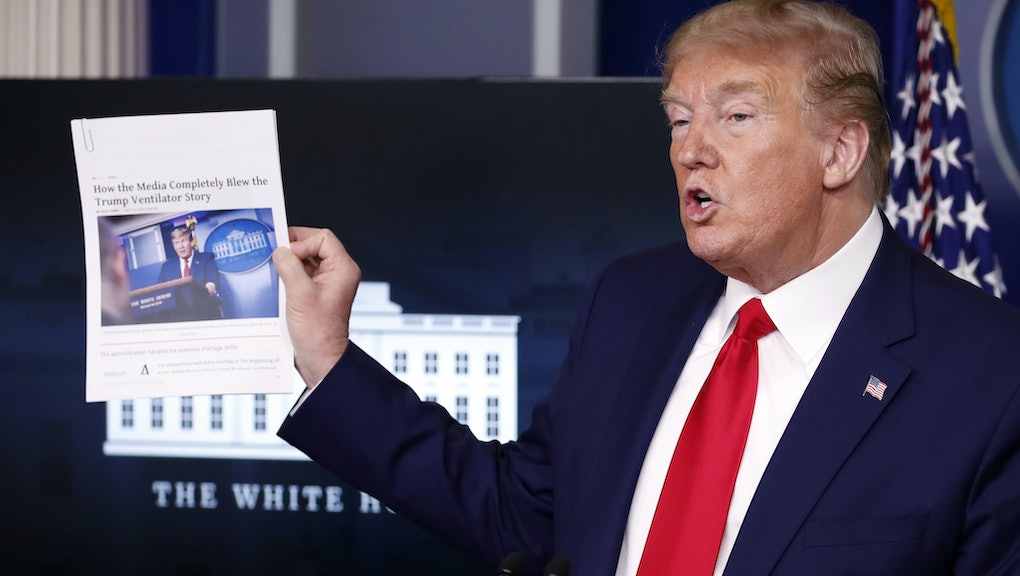 Will Trump lose the election because of coronavirus?

There’s an odd, stilted phrase you may have seen percolating through news reports and political analysis over the past month or so: the rally-round-the-flag effect. The term describes the phenomenon in which political parties and leaders gain a substantial bump in approval after a tragedy, like when New York City Mayor Rudy Giuliani became “America’s mayor” following the Sept. 11 attacks. In the immediate aftermath of coronavirus crashing into the United States, many perceived that President Trump would receive his own rally-round-the flag bump. But now, more people are wondering whether Trump will lose the election because of the coronavirus outbreak.

At first, it seemed like Trump did receive the post-crisis polling bump. In late March, his approval rating soared to 49%, matching an all-time peak, and millions of people tuned into his daily presidential coronavirus briefings. Perhaps he’d be able to maintain this standing and emerge as a unifying figure, projecting the kind of calm and confident leadership that desperate, panicked Americans were craving during the crisis.

Well, so much for all that. Over the past month, Trump has squandered the opportunity to use coronavirus as a unifying issue, instead using the health crisis as yet another partisan wedge. Rather than projecting calm and confidence from the briefing room, he’s used his massively valuable earned-media opportunities to bicker with Democratic governors, demand that states reopen early, and spur dangerous protests by tweeting things like “LIBERATE MICHIGAN.”

In short, he’s back to his old self, even as America has plunged into a new reality. His poll numbers are back to their old selves, too. Within a month of his peak, Trump is back to a Gallup approval rating to 43%. Comparing Trump’s coronavirus bump to that of other presidents during moments of crisis, Business Insider found that Trump has experienced the weakest rally-round-the-flag effect in modern history. During the Cuban missile crisis in 1962, President John F. Kennedy’s approval rating hit 74%; President George W. Bush was at 90% after 9/11. President Barack Obama reached 52%, a gain of 6%, following the assassination of Osama bin Laden in 2011. (Trump himself did not receive a polling bump in January after killing the Iranian general Qassem Soleimani, who had orchestrated many terrorist attacks against the U.S.)

The United States has become the world’s leader in cases of coronavirus, and the federal government’s failure has a lot to do with it. Though Trump took the correct step of preventing travel to China, even with that policy he likely acted too late to have the type of significant effect he's claiming it did. He also failed to encourage social distancing until long after other countries embraced it, and now that he has endorsed it he is constantly bucking against the safety measure. In 2018, his administration disbanded the government's pandemic response team, and earlier this year, amid clear warning signs of a crisis, he failed to acquire needed medical equipment in a timely manner, leaving states to bid against each other for masks, ventilators, and gowns. In the meantime, front-line medical workers have been recycling masks and using rain ponchos as PPE.

Meanwhile, the United States is still struggling to procure the number of tests that would be needed to safely reopen the economy. And every single one of these failures has played out directly in the public eye. Trump's lack of urgency in the beginning of the outbreak allowed the virus to take many more lives than it might have, and will leave the economy shut down for far longer than it needed to be.

In short, [Trump]’s back to his old self, even as America has plunged into a new reality.

So, Trump has failed to reach a high level of national approval because he refused to treat the crisis as a national problem. Instead, he's framed it as something caused by Democrats, with Democrats to blame. And correspondingly, his chances of re-election are beginning to look far bleaker than they did just two months ago.

At the beginning of the year, Republicans envisioned Trump cruising to re-election on the back of a record economy and a galvanized party. Instead, he’s now facing doom-and-gloom projections on the economic front, while Americans judge him harshly for his response to the biggest crisis the country has faced in a generation. In a new poll from NBC News/Wall Street Journal this weekend, 65% of Americans agreed that Trump did not treat coronavirus “seriously enough at the beginning.” A Pew Research Center poll last week also found that 65% of people felt that Trump was “too slow to take major steps” in dealing with the virus.

Over the next six months, people will begin looking for a scapegoat for the massive financial hardships they’re going through. In the last four weeks, more than 22 million people have filed for unemployment, with scores more struggling to do so thanks to welfare infrastructure that’s been overwhelmed by demand. Meanwhile, the government program designed to keep small businesses afloat has already run out of money, while big profitable enterprises managed to siphon off some of the cash to boot. Despite trying to shift blame to China, former Vice President Joe Biden, and individual state governors, Trump — who was downplaying the threat from the virus throughout the month of February — seems to have painted a massive target on his own back.

For a man who has personalized the economy’s solid strength during his administration, a downturn now is likely to be an albatross around Trump’s neck this fall. Just look at the unemployment tallies in Trump’s six most important swing states from 2016 — Arizona, Florida, Michigan, North Carolina, Pennsylvania, and Wisconsin — where more than 2 million people filed for unemployment in the last two weeks of March alone. The economy has long been one of the most consistent predictors of electoral success; The Atlantic notes that an “an additional percentage point of GDP growth translates roughly into an additional percentage point of the vote share” for an incumbent president.

Goldman Sachs just predicted that GDP in the second quarter of 2020 will fall by 24%. Numbers like these do not bode well for a president who has spent the last three years bragging day in and day out about his precious stock market.

None of this is to say that Biden, now the Democratic Party’s presumptive nominee, is a lock for a win in November. He’s struggled to tap into the young, progressive Democratic base, not to mention there’s been a credible sexual assault allegation leveled against him that he’s yet to comment on publicly. But with the man currently in the Oval Office having bungled the administration’s response to coronavirus so profoundly, Biden may well reap the reward.

The coronavirus pandemic is unlike any crisis that the country has faced in a hundred years, and voter behavior may not mirror past precedent when it comes to the economy. One thing is clear, though: Trump had an opportunity to bring people together over the past two months. By squandering it, he’s made his own shot at re-election much more difficult.

More like this
This poll shows just how strong Trump's hold on Republican voters is
By AJ Dellinger
Vaccines are good. Threatening to evict someone over them is not
By Rafi Schwartz
I never want Tucker Carlson to stop talking about Nicki Minaj's cousin's friend's enormous balls
By Rafi Schwartz
Stay up to date