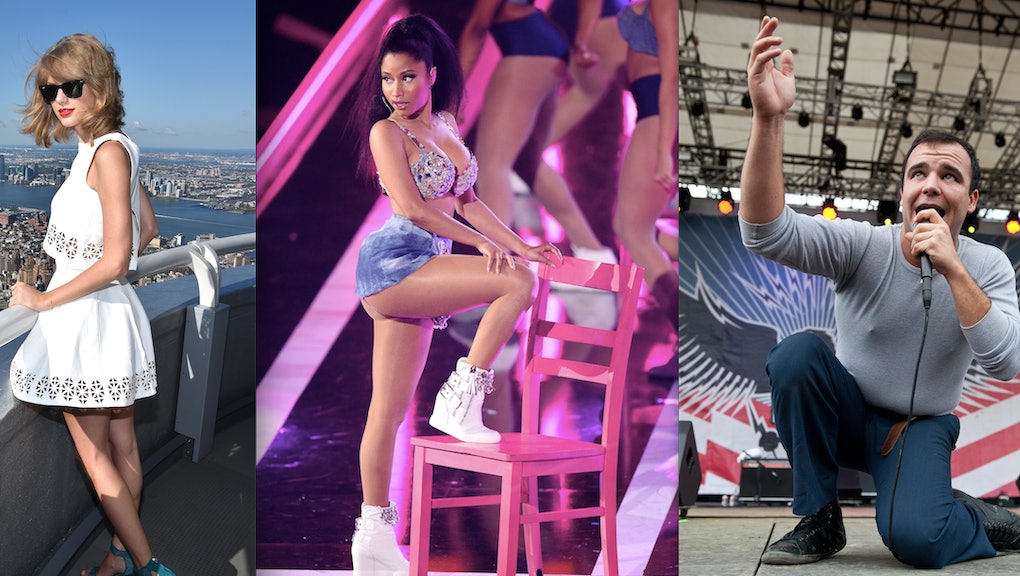 It's December, which means you can't browse the web without coming across innumerable "best of 2014" lists. These lists provide a huge service — they collect the best of the year's music in one clickable place. But most of the time, you have to scroll way, way down to get to the top picks — the ones that truly matter.

So we went through the top song lists from a number of outlets — the New York Times (which publishes four different lists, one for each critic), Vulture, Billboard, Fader, Spin, Rolling Stone, Consequence of Sound, Fact Mag, Pitchfork, Complex, Grantland and Time — and found the songs that impressed critics across the board. Unranked lists — of longer than 10 songs — and lists that were separated by genre were mostly not taken into account, since it's difficult to know how to compare those to numbered overall lists.

This process yielded 20 songs that united critics. Read on to see the songs that most critics agreed on, and where they appeared on their lists.

That this song has dominated year-end synopses suits a year in which women dominated the pop charts and female collaborations were commonplace — "Bang Bang," "Problem" and "Fancy" are just a few other key examples. It's thrilling to hear two of pop's greatest figures combine forces. Hopefully Beyoncé and Nicki will do an entire album together, much like Jay Z and R. Kelly did in the '00s. Other Beyoncé tracks also appeared on several lists, notably "XO" (Spin No. 7) and "Drunk in Love" (Rolling Stone's song of the year).

This isn't just an immaculately constructed track with a great video, it's a historical monument — the track that made Swift the first woman to unseat herself from the top of the Hot 100 ("Blank Space" stole the No. 1 spot from "Shake It Off"). It's a testament to 1989's depth that you could argue for the inclusion of at least four different Swift tracks on a year-end list. For what it's worth, Mic's money's on "Style."

In album or song form, Twigs appeared everywhere in year-end synopses — aside from Beyoncé's album, it's hard to think of any recent album that achieved the same level of critical approbation. "Two Weeks" was the album's first single, with yet another striking video, and it's a fine place to start the Twigs experience, sweeping and breathless.

The hip-hop duo appears again and again on the best-of roundups — for two different songs. Reviewers are split: Are you a "No Flex Zone" fan or a "No Type" supporter? Don't choose. Take both, and listen to the duo's latest track, "Throw Some Mo," featuring Nicki Minaj. It would have definitely appeared on more lists if the public had had a little more time to digest it, and it shows that the group can put together an exciting track without the word "No" in the title.

DJ Mustard had a ton of hits this year, but this one popped up most often on lists, beating out Jeremih's "Don't Tell 'Em." As the year progressed, Mustard's signature beats got thicker, but his strongest work came from late 2013 and early 2014, when he was at his most skeletal. Tinashe used this song as the lead single to her album, Aquarius, which also ended up on a lot of best-of lists; that's a clever bait-and-switch on her part, since her album doesn't sound much like "2 On."

6. "Seasons (Waiting on You)" by Future Islands

Future Islands' latest album came out on the beloved indie label 4AD. The band doesn't usually make much noise on the radio, but they attracted a lot of attention for an electric Letterman performance in March. Subsequently, this sturdy piece of throwback synth-pop (unusual vocal flourishes push it away from the edge of boredom) became the band's first track to crack Billboard's "Alternative Songs" chart.

Everyone loves Sia, a pop star who plays by her own rules. She's been writing hits for others for several years, but in 2014 she stepped out with a smash of her own. Like many of the songs that dominated year-end conversation, this one had a popular video that's spawned spoofs. It also had good old-fashioned vocal power — when in doubt, overwhelm.

Drake dominated 2014 without even putting out an album — the guy got a Grammy nomination for a song that he threw on Soundcloud for free. That song, "0 to 100/The Catch Up," has bubbled up in the news lately because it apparently caused a fight between Drake and Diddy. It hasn't left the charts for 20 weeks, and anyone who's heard it knows it's a fight-starter, an unchecked stream of hubris from an MC who knows that right now, he's sitting unchallenged at the top of rap's pyramid.

Like FKA Twigs, Run the Jewels were praised for their full-length record, their release strategy and their brilliant social activism. The lead single from the album, "Close Your Eyes (And Count to Fuck)" earned the most nods, but "Oh My Darling" distills the duo's sound to its bruising essence.

Still, the most powerful moment in Run the Jewels' year wasn't musical — it was the speech Killer Mike gave after the grand jury decided not to indict police Officer Darren Wilson in the killing of Michael Brown.

Like Rae Sremmurd, Young Thug's problem is that he had several compelling hits this year, but most critics wanted to pick just one. He started the year with "Danny Glover," which earned a remix from Nicki Minaj (always a good sign), and became one of Kanye's favorite party songs. Then he got the strange, bewitching "Stoner" onto the radio, and turned in a stellar verse on T.I.'s "About the Money." And then there was "Lifestyle," Thug's collaboration with Birdman and Rich Homie Quan: sticky, partially unintelligible, infectiously celebratory.

Any music fan should be excited that this track keeps popping up high on year-end lists. If you don't know Makonnen, that's fine — a year ago, hardly anyone knew who he was outside of Atlanta. But thanks to a Drake cosign, Makonnen's now got "Tuesday," a big hit, and a deal on Drake's label. No song sounded quite like this in 2014, which is an accomplishment for any artist. Even more surprising, for all those who think pop success still means artistic compromise, Makonnen didn't have to change his sound in the slightest bit, and he cracked the top 15 on the Hot 100.

Remember this guy? In the first third of the year, anticipation for his album, Honest, was high, but he wasn't able to hold onto the spotlight, quickly falling behind Atlanta's young up-and-comers, Migos, Young Thug and Rich Homie Quan. But months after Honest, "Move That Dope" still sounds potent, like Kanye's "Clique" in overdrive. Pharrell delivers a lithe, exciting verse.

The lead single from Perfume Genius' Too Bright was remarkable, strong and unhurried. In an alternate world, this gay rights anthem would be as big a hit as "Chandelier." It also featured the great line, "No family is safe when I sashay," which seemed to resonate with extra vigor in a year when Bobby Shmurda's sashay — officially termed the Shmoney Dance — swept the nation.

This goofy track is another critical favorite. It sounds like a precocious 7-year-old spent some time in a club and then managed to get her hands on Pro Tools — the drums might have been sampled from a cartoon. And to be fair, not much is known about electro duo QT; that may well be the case. But however "Hey QT" came about, it's a bubble that refuses to burst.

15. "Everything Nice" by Popcaan

It's always good to see dancehall on year-end lists, since it's an exciting genre that deserves far more attention than it gets. Popcaan is one of those lucky few dancehall singers who managed to cross over to the U.S., getting radio play and even earning a few reviews of his album Where We Come From. "Everything Nice" is one of 2014's most soothing songs, and it totally merits its unexpected inclusion on two lists.

This band channeled five decades of classic rock into their latest album, Lost in the Dream. The drums pound like metronomes, the guitar takes lengthy solos and lead singer Adam Granduciel sounds like countless ragged-voiced rock heroes. They don't know how or when to end a song, but that didn't stop people from loving them.

In interviews, Caribou's Dan Snaith talked repeatedly about how he wanted to make something that would grab people immediately and make "the connection as direct as possible." Consider this track an unqualified success. It's one of those rare songs that manages to enact the very sentiment it expresses. The glorious repetition of the phrase "Can't do without you" drives the song forward, and when the mantra briefly disappears, you find yourself missing it dearly.

These days, the female rapper conversation usually boils down to Nicki versus Iggy, since those are the only two rappers you encounter on the radio. But suddenly Def Loaf arrived with a fresh voice and a mesmerizing single. Ignore all the "Try Me" remixes and head straight for the original.

Few singers can match Charli XCX's explosiveness. Her best songs are all power, tightly coiled bursts of raw muscle. Her new album, Sucker, was hit or miss, but "Boom Clap" remains one of the year's most joyous tracks, with an onomatopoeic chorus that makes "Bang Bang" feel lifeless by comparison.

20. "Love Me Harder" by Ariana Grande feat. The Weeknd

Ariana Grande was a constant radio presence in the top 10 this year, but only one of her three singles appeared on year-end lists: "Love Me Harder," the singer's sexiest track to date. Her voice meshes well with the Weeknd's, and the song channels the same '80s power-chug as Drake's "Hold On, We're Going Home" or Taylor Swift's "Style." Honorable mention to Bobby Shmurda's "Hot Nigga," which appeared on lists from Fader (No. 9) and Complex (No. 8).