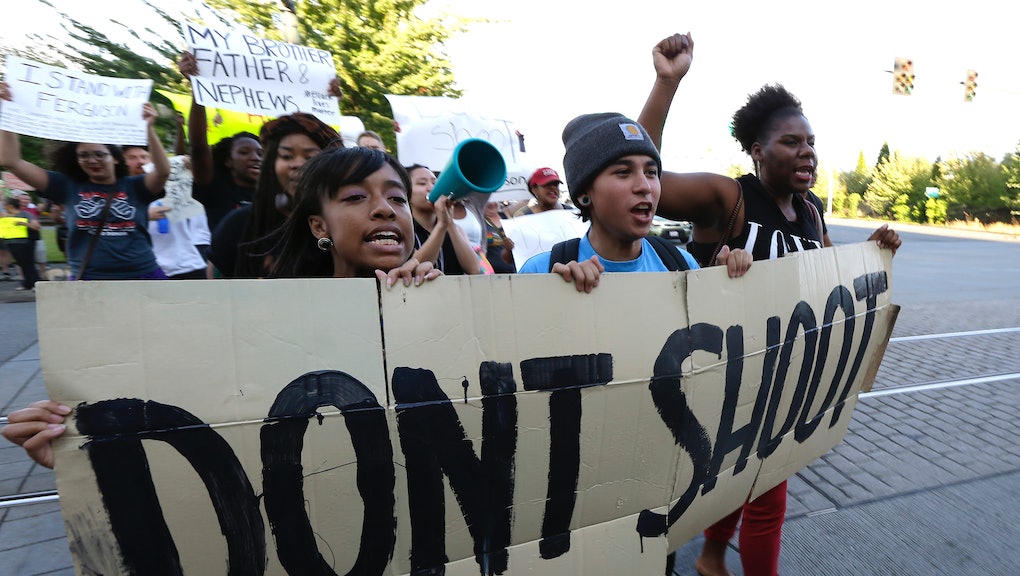 6 Reasons Why America Must Stop Ignoring Its Black Youth

Thousands of black young people in and out of Ferguson, Mo., are protesting the systemic abuse and lack of transparency from law enforcement related to the killing of Michael Brown.

But despite numerous national demonstrations, critiques and commentary through online networks, too many Americans continue to silence  — or at the very least, deliberately ignore — the voices and perspectives of black young people, many of whom have important things to say about the flaws of the justice system, police brutality and racial profiling.

Ultimately, anyone who operates in such a way is part of the problem. But more importantly, what most seem to forget is that the perspectives of America's youth should be a vital part of a conversation regarding the shooting death of an 18-year-old black man. Brown was about to embark on his college education, an opportunity many consider part of the so-called American Dream.

Sadly, Brown will never have that opportunity. He follows an unfortunate trend of young black people — young men and women such as Trayvon Martin, Renisha McBride, Jordan Davis and dozens more — whose lives were lost as the result of systems created and sustained by the older adults in these situations. Racial profiling, the school-to-prison pipeline, the prison-industrial complex and reckless gun laws are but a few of the culpable social issues at play. Yet the voices of black youth are rarely present on network news panels or in relevant policymaking discussions.

The protests in Ferguson have shown the world that the voices of black youth won't be silenced. Rather than ignoring their much-needed contributions to important dialogues, it's time America woke up and actually listened.

Here are some of reasons why America needs to stop ignoring its black youth:

1. They are routinely misrepresented in mainstream media coverage.

Even before Ferguson, young black people have been routinely mischaracterized in the news, on television shows and in everyday conversations as "thugs," "welfare queens" and lazy, unintelligent children. There's an obsession with covering black-on-black violence, which takes accountability away from the larger systems that fuel racial and economic tensions in the first place, such as unequal educational opportunity and a disproportionately high black unemployment rate, which affects young blacks in higher numbers than their white counterparts.

The same negatively skewed coverage has impacted perceptions about the Brown case, to a degree. Outlets jumped to report the generally irrelevant information that Brown had marijuana in his system at the time of his death and many others used that information as fodder for character assassination rather than maintaining accountability on Officer Darren Wilson and the Ferguson Police Department.

In addition, various young black men have lambasted news organizations for a consistent trend of choosing the most stereotypical photos of black crime victims, as they often choose images that don't speak to the character or true nature of the individual who has died. It all came to a head in the trending hashtag #IfTheyGunnedMeDown.

2. They rarely get media attention unless they commit a crime or are killed.

According to various reports, 64,000 black women, many of them young, are currently missing in the United States. These women rarely, if ever, get any media coverage, as the air time and national spotlight disproportionately skews to focus on white kidnapping victims such as Elizabeth Smart and Natalee Holloway.

When a young black person is killed by a stray bullet or gun violence, however, news cameras are much more likely to follow. As part of a national trend of gun violence, shooting deaths on the south side of Chicago prompted outrage in 2013, with considerable attention given to a few young black victims, including 15-year-old Hadiya Pendleton. Her story even prompted President Barack Obama to call on Congress to reform gun laws. While these issues and lives are important and merit discussion, the positive and uplifting contributions and stories of black young people are rarely present, including the numerous prodigies, entrepreneurs, activists and others working tirelessly — if in relative obscurity — around the country.

3. Their issues are being discussed by adults who don't have an inside perspective.

According to a study by scholars at the University of Chicago and the Black Youth Project, researchers and policymakers have been "content to detail and measure the behavior of young black Americans with little concern for their attitudes, ideas, wants and desires." During policy discussions about gun violence, educational and employment opportunities, prison reform and racism in America, black youth perspectives are rarely included as part of framing solutions to problems that directly impact them.

More often than not, people will hear older voices such as Don Lemon or Bill O'Reilly telling black young men to "clean up their act" and "pull up their pants," to make their lives better in the face of systemic racism and police harassment such as stop and frisk. Who can forget the older white male writer at Forbes who, in a controversial 2012 piece titled "If I Were A Poor Black Kid," told black youth to pull themselves up by their bootstraps, ignoring his own privilege in order to excuse away institutional issues.

There's little to no acknowledgement that the experiences and perspectives of black youth in America today differ greatly from previous generations. Adults can help nurture and teach young people while learning from them at the same time — these actions aren't mutually exclusive. This is part of the reason why the researchers took on the task of surveying hundreds of black young people to track their attitudes on various social and political issues, as part of an effort to ensure they are no longer left behind in these types of key discussions.

4. They are enrolling in college and graduating in ever-increasing numbers.

In recent decades, young black people have nearly caught up to their white counterparts in college enrollment, according to a report by FiveThirtyEight. This information, which came from the National Center for Education Statistics, showed that 65% of black high school students enrolled in a two- or four-year college, compared with 70% of their white peers.

However, the positive outlook changes when graduation rates get factored into the equation. The most recent data shows that 40% of black college attendees graduate with their bachelor's degree within six years, compared with 62% of whites.

That said, the sheer numbers are trending upward, meaning many more black young people will enter workforces equipped with a college degree. Many of them are the first in their families to attend college, an experience chronicled in the 2012 documentary, Woke Up Black, which followed five different Chicago youths on their paths to educational attainment despite various institutional obstacles many of them endure.

5. Their cultural contributions are everywhere, even when they're being appropriated.

This has been a clear and present reality for multiple generations now. From dances like the Harlem Shake and twerking, to various clothing styles and contributions to the recording industry, the lives and experiences of black young people have been turned into artforms that have in turn inspired generations of Americans from all backgrounds.

Even when white artists steal, mock or belittle black culture through appropriation and perpetuation of false racial stereotypes, young black people continue to work to create the "next big thing." Pretty soon, TIME Magazine may even stop doing explainer pieces on black slang creations such as "bae" — which sparked mockery on Twitter from blacks who felt the legacy outlet made a racially awkward attempt to get their audience up-to-date on a term that's been used in the community for years.

6. They are charting new territory in business, civil rights, science and more.

If you take a look at key public figures at the forefront of LGBT rights and modern-day feminism, you'll notice that quite a few of them are African-Americans in their 20s and 30s.

That includes Michael Sam, the first openly gay professional football player in the NFL. It also includes Mikki Kendall, who launched a globally trending social media campaign to call for renewed attention to long-overlooked racial issues within the feminist movement. And even Laverne Cox, whose breakout role as Sophia Burset in Orange is the New Black earned her the distinction of being the first-ever transgender actress nominated for an Emmy Award, in addition to her advocacy with the case of CeCe McDonald. And McDonald, who is in her early 20s, is also using her voice and her own story to champion justice system reform, especially for trans women.

There are dozens more, whose voices are clear and present in the media, online and in various organizations across the country, blazing new trails for both social progress and new, innovative practices in their industries.

That makes it all the more important to stop ignoring black young people and start taking them seriously. And that time is now.