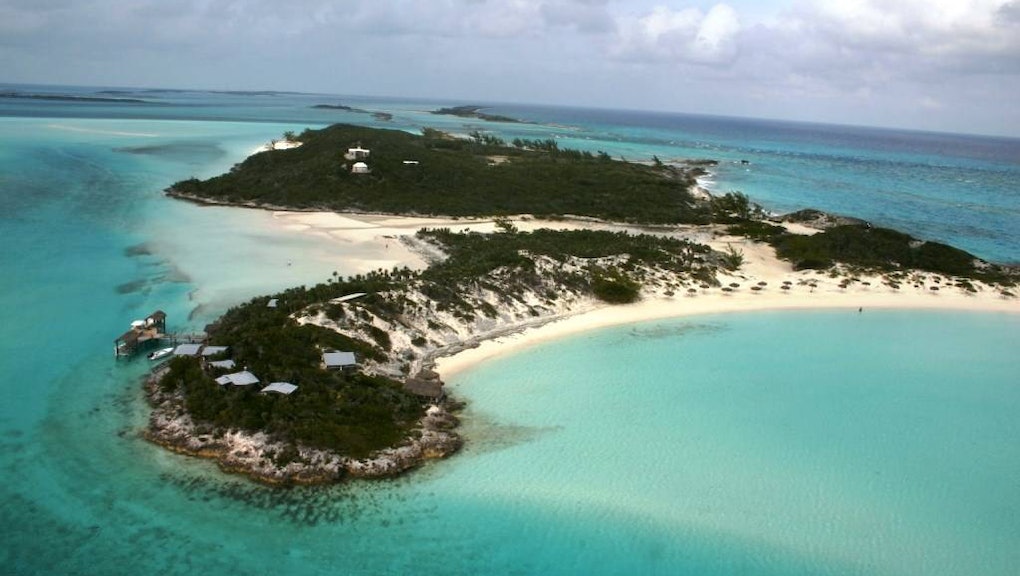 Remember those beautiful islands featured in the Fyre Festival promotional video? They were surrounded by turquoise water, covered in white sand beaches, and models and cute pigs seemed to be the only creatures that populated them? Obviously, things didn't turn out so well for those involved in Fyre Festival, but the islands themselves are doing just fine. In fact, one of them is up for sale, and anyone with $12 million to spend can be its next owner, according to a report by Forbes.

The famous models don't come included, but there are plenty of other perks of the island, named Saddleback Cay. The 35-acre plot of land has seven major and minor beaches and a protected bay area, and is surrounded by coral reef. The island also has a house and guest quarters, according to realtor HG Christie, a Bahamian real estate company that specializes in luxury properties and islands. But the main selling point is the land itself — the only amenities on the listing for Saddleback Cay are island, and dock.

There are a couple of other important factors to note about the island. First, it is not the island that the Fyre Fest promo claimed was owned by Pablo Escobar and used on his drug smuggling route — that was a different island featured in the video, named Norman's Cay. It is also not the island where the festival was ultimately (not) held, on Great Exuma.

But it is the island in the opening shots of the now infamous promotional video, featuring Hailey Bieber, Bella Hadid, Chanel Iman, and several other supermodels. And despite the fact that Fyre Festival ended terribly for its masterminds and all the people who got conned out of the money they paid to attend, the fallout of the ordeal didn't hurt the realtors at HG Christie trying to sell Saddleback Cay.

According to them, after the release of the two rival documentaries about the failure of Fyre Festival – Netflix's Fyre and Hulu's Fyre Fraud – they actually received an uptick in interest.

“I actually had a buyer the next day after it aired”, HG Christie real estate agent John Christie told Forbes. “They came down to check it out but it ended up not being right for them.”

And while the island will find a new owner and won't be forever tied to the failure of Fyre Festival, the men who made Saddleback Cay famous are suffering a much different fate. Founder Billy McFarland is currently serving out a federal prison sentence after being convicted on fraud charges. His co-conspirator, rapper and entrepreneur Ja Rule, isn't facing any jail time — but will probably never stop getting questions about just how involved he was with the festival's failure.

In a recent interview with the Breakfast Club, Ja Rule again claimed he had no idea the festival was going to be such a massive failure. He claimed he was as duped by McFarland as anyone else, but maintained that the concept of the festival was still a good idea.

"It was organized bad. The idea of it was dope, the marketing was dope, everything was done very right on that end," Ja Rule said to the Breakfast Club. "The execution was extremely bad, man."

Well, if Ja Rule ever tries for Fyre Festival 2.0, we know of a great real estate listing for a little island that he could check out, if he's got a cool $12 million sitting around.

More like this
Lil Nas X’s ‘Montero’ is a vulnerable guidebook on self-acceptance
By Brandon Yu
Steve from 'Blue's Clues' gave us the closure we didn't know we needed
By Kara Weisenstein
After shutting up for a minute, celebrities want everyone to listen to them again
By Brandon Yu
Stay up to date