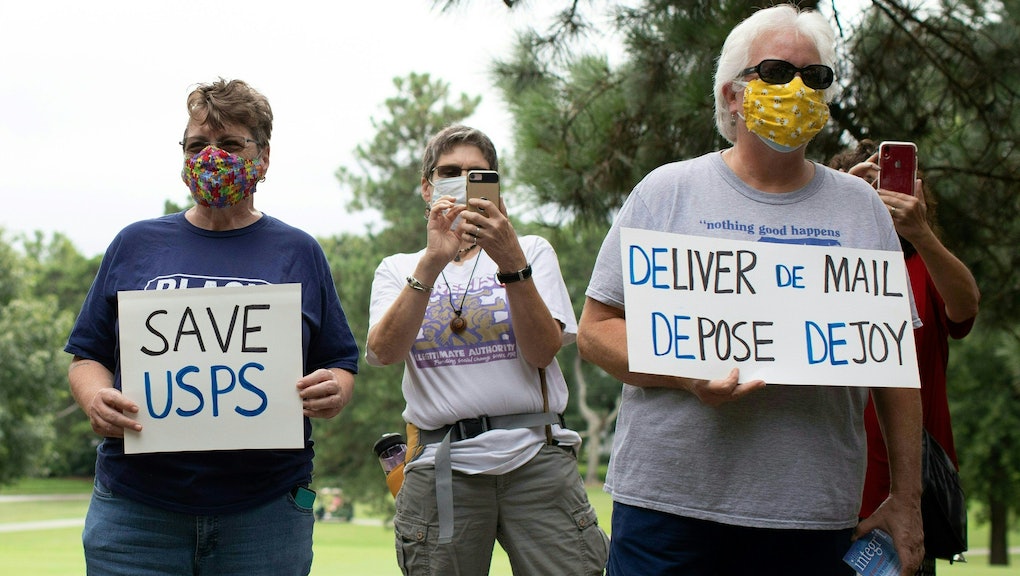 The USPS can stay as is — for now, the postmaster general says

Since being appointed to lead the USPS earlier this year, DeJoy had outlined a list of changes to Postal Service policy that, in practice, kneecap the service's ability to do its job. Overtime hours have been halted; the extra hours typically ensure that all carriers can complete their deliveries, which is particularly essential for rural communities. Mail-sorting machines have been deactivated and people have reported seeing mailboxes being carted off the sidewalks in their neighborhoods. These are all essential resources for the Postal Service to operate in normal times — let alone during an election year where a pandemic has led to a predicted surge in mail-in voting.

As DeJoy said, there has been a lot of discussion about whether the USPS is ready to meet the challenges of delivering millions of absentee ballots this November — especially given that Republicans in the White House and on Capitol Hill have refused to provide the funding that the mail service needs to do its job. Back in April officials warned of a multi-billion dollar shortfall, as the coronavirus crisis compounded an already-sizable hole in the USPS's profit margins.

That's because, well, the USPS isn't a profitable institution. USPS defenders say that mail carriers provide a public service — it doesn't have to be profitable. But Republicans, and especially President Trump, have stated throughout most of the summer that the failing business should be allowed to die slowly. Trump even essentially admitted that he's allowing the USPS to flounder to juice his chances of winning a second presidential term.

Then, after weeks of public outcry, it seemed that there was a change of attitude. Trump, who has derided the use of absentee voting for anyone but him, tweeted Monday that the postal system should be saved, apparently unaware that he is the one letting it disintegrate. On Tuesday, the Trump-appointed DeJoy announced that the USPS will not be scaling down its operations, but actually expanding its apparatus to meet mail needs.

DeJoy said, "I am announcing today the expansion of our current leadership taskforce [sic] on election mail to enhance our ongoing work and partnership with state and local election officials in jurisdictions throughout the country." One of the issues that still remains is whether or not the Postal Service will have the state and local funding it will need to remain operational. House Speaker Nancy Pelosi (D-Calif.) announced Sunday that she would reconvene members of the House earlier than expected to vote on USPS-related legislation. Senate Majority Leader Mitch McConnell (R-Ky.) has not yet announced plans to call senators back to the Hill.

Given that states literally do not have the funds to support the Postal Service to make sure this November's general election progresses smoothly, DeJoy's statement only begins to address Americans' concerns. For instance, DeJoy claims that retail hours will not change, blue mail boxes will remain in place, existing mail processing facilities will remain open, and that employee overtime will continue to be approved. But these claims don't address how that overtime will be paid for.

While the shift in opinion is rather significant, the release neglects to outline details. And if there's anything the Trump administration has proven, it's that it lives in the margin between what it says and what it does.