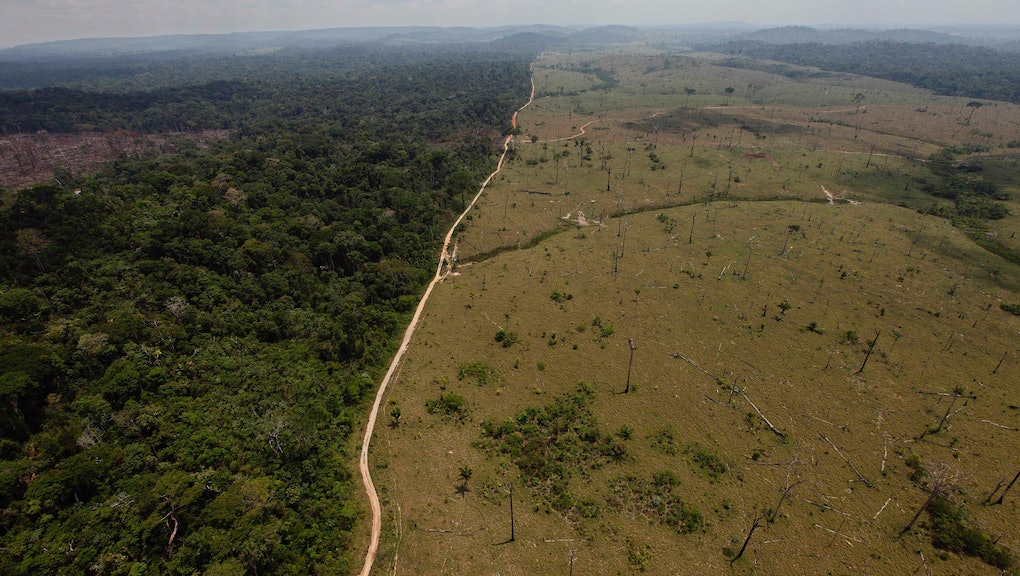 The news: The last time that the Earth went through a mass extinction, it was 66 million years ago and dinosaurs roamed the planet. Three-fourths of Earth's species died back then, and now, it looks like we have a similar situation heading our way.

Mass extinctions are not a new phenomenon: Scientists believe that the Earth has already gone through five, all instigated by natural causes such as asteroid impact, volcanic activity and atmospheric and environmental change. So the idea of a sixth extinction event, in and of itself, is not a complete surprise — but it's the speed of development that is causing alarm.

On Thursday, a new study published by the journal Science announced not only that the Earth was on the brink of another extinction, but that plants and animals are dying at an unprecedented speed — at least 1,000 times faster than they did before humans arrived. The current rate of extinction is 10 times faster than what biologists previously believed.

"We are on the verge of the sixth extinction," Stuart Pimm, a Duke Univeristy biologist who led the research. "Whether we avoid it or not will depend on our actions."

What is happening? Many of the extinction-related events — climate change, rising sea levels, ocean acidification, species loss — have all happened already in the past, long before humans even came into being. But the difference now is that mankind is helping to accelerate this pace, and we can see the effects already.

Earlier this week, the World Meteorological Organization announced that the the level of carbon dioxide in the air has reached new heights, the highest recorded average in human history — and the increase can be directly traced to the consumption of fossil fuel since the industrial revolution. "This should serve as yet another wake-up call about the constantly rising levels of greenhouse gases which are driving climate change. If we are to preserve our planet for future generations, we need urgent action to curb new emissions of these heat-trapping gases," said WMO Secretary-General Michel Jarraud.

There is more. A blistering UN study and White House report this year have also linked greenhouse gas emissions from deforestation and fossil fuel consumption to global warming, rising sea levels and ocean acidification — which have had a ripple effect on a host of other environmental problems.

For one, the total collapse of large parts of the Western Antarctic ice sheet is estimated to raise sea levels by as much as 10 feet in the next few hundred years, which will devastate coastal areas and change the landscape as we know it:

The acidification of the oceans — combined with pollution, habitat destruction and overfishing — has also led to a 90% decline in large fish populations around the globe. The same causes have also led to the ongoing destruction of the Great Barrier Reef, which lost more than half of its coral cover since 1985; a new study estimates that that damage to the famous reef system would be "irreversible" by 2030.

But while this kind of habitat loss may be unintentional, it's important not to discount the effects of poaching and fishing either. Elephants and rhinos are on the verge of extinction due to the ivory trade, and the aforementioned issue of overfishing has serious consequences; not only does it affect fish and other predator species that need the food supply, it can devastate coastal communities that depend on fish for their diet as well as their economy.

What can we do? Not all hope is lost — yet. While another extinction event may be inevitable, we can still try to mitigate the anthropogenic factors that are contributing to its accelerated pace. "Although things are bad, and this paper shows that they're actually worse than we thought they were, we are in a much better position to do something about that," Pimm said.

But that also means acknowledging the problem, which many people are still unwilling to do. Just last week, House Republicans voted to prevent the Department of Defense from using its funding to address the issue, despite America's top military brass arguing that climate change is now a "national security concern." Perhaps a planet-wide extinction might qualify as such a concern.