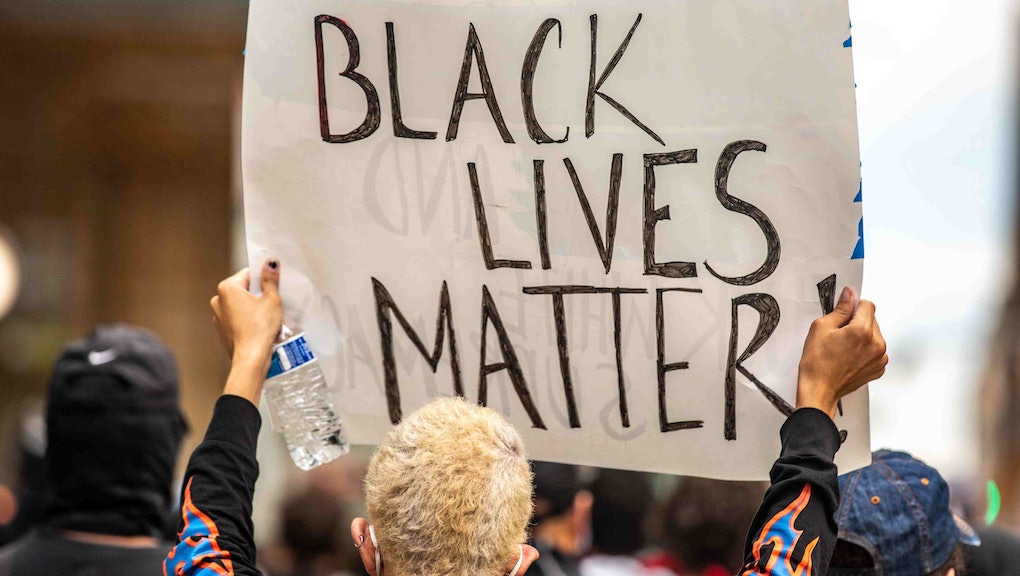 4 activists reflect on the progress we made in 2020

At some point in the future, a historian will attempt the herculean task of synthesizing and connecting the events of 2020. We started with the Democratic primaries, seeing an across the board shift toward progressive political ideas, like replacing the country's for-profit health care system. Then, in May, the combined atrocities of the targeted killing of 25-year-old Ahmaud Arbery, the police killing of 26-year-old Breonna Taylor, and the police killing of George Floyd spurred protesters into the streets to proclaim "Black Lives Matter."

But this summer's protests weren't just about police killings. We saw communities push back against Immigrations and Customs Enforcement raids, tribal nations protest the Trump administration's colonization of Native land through construction of the border wall, grassroots organizers push for youth and Latinx engagement for a presidential candidate who many viewed as harmful. We witnessed Congress decline to remove an impeached President Trump from office and fail to protect us from coronavirus. We watched public officials introduce legislation attempting to reform policing in America and to mitigate the ballooning crisis of climate change. We saw the election of President-elect Joe Biden, the appointment of Rep. Deb Haaland (D-N.M.) to secretary of the interior, and in the new year Vice President-elect Kamala Harris will be sworn into office, the first Black and Indian woman to assume the role.

To put it simply, 2020 was a year of activism. Here's what four organizers had to say about the year in protest.

2020 is a year of introspection and self-awareness. A year of unlearning and relearning what action looks like. My hope is that the people who took to the streets this year to protest racial injustice and police brutality will not only continue their activism, but use it to revitalize and educate their communities. We have a new wave of radical and intelligent thinkers, and I believe the action that was put forth this summer will propel them into positions of leadership that we desperately need.

We stared down authoritarianism and we turned out in record numbers to say no to the Trump regime. We, the people, stand and sit together for this giant experiment of democracy, for the rooted power of the people that will not be moved. But our systems are not designed to build rooted people power. It's time to change the system. ... And yet, I am full of hope and optimism about the discussions around the Georgia Senate races. "Listen to local organizers" is a phrase that, actualized, can change how out of state and national organizations leverage their resources to build local power and earn a win.

2020 showed us that when disaster strikes, it is those who are already marginalized that suffer the most. But amidst the plagues of police violence, mass incarceration, economic hardship and hunger, and disease, it was precisely these people that led the way and inspired us — hunger-strikers in immigrant detention, community organizers who mobilized millions to defund the police, voting rights activists who overcame the suppression tactics and helped us kick Trump out of the White House, essential workers. We're going into 2021 more convinced than ever that none of us is free until all of us are free, and that "back to normal" is not an option because normal is what got us here. It's not enough to roll back the most egregious of Trump's xenophobic policies; the whole detention-deportation machine must be abolished. Following the lead of those directly targeted by our government, we're ready to take to the streets and disrupt business as usual to hold Biden accountable. Nothing less will ensure that Never Again really is never again.

This year has showed us that we are entering a third reconstruction in the United States. While the country is reconstructing, Black folks have to organize and strategize together. We can't continue to sloganize "I am somebody", we have to make them somebody. ... The only way we can do that is if we make HBCUs free for Black people. Freedom summer 2020 brought us here. Now we have to build a nation together.

More like this
A state-by-state list of racist Confederate monuments that have been removed so far
By Vanessa Taylor
This Virginia school system shows us what defunding the police could actually look like
By Ian Kumamoto
Should public transit be free?
By Andy Crump
Stay up to date