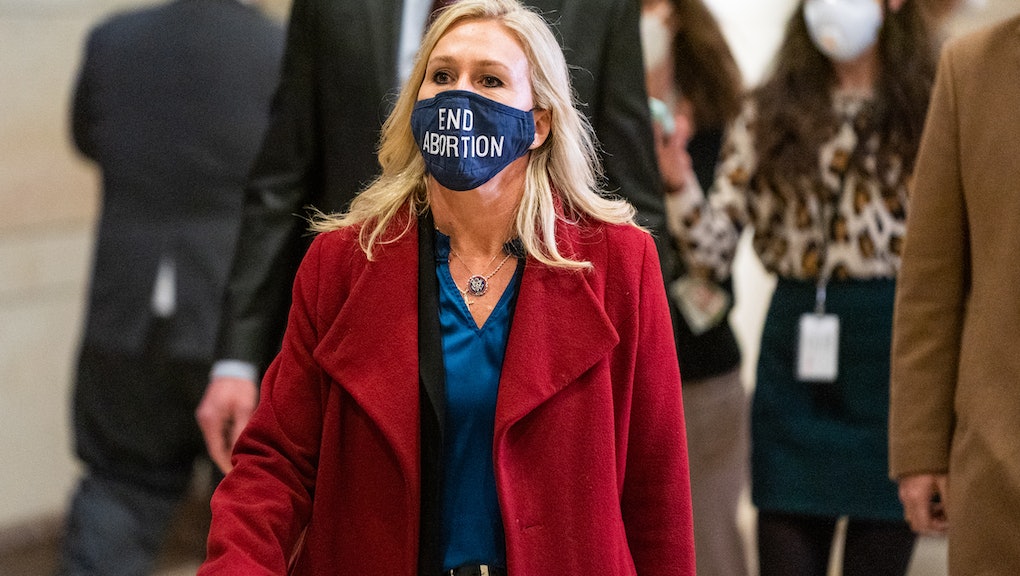 Oh god, why is Marjorie Taylor Greene challenging AOC to a debate?

Every time I see Georgia Rep. Marjorie Taylor Greene’s name trending on Twitter, I always say a quick prayer before I investigate the cause. Today, I wish I had said a little longer prayer.

For reasons unbeknownst to me, Twitter, and America as a whole, the congresswoman woke up Wednesday morning and thought she'd let everyone know that she could take on New York Rep. Alexandria Ocasio-Cortez (D) in a debate on the Green New Deal.

“Since you sponsored the Green New Deal and have a degree in economics, I’m sure you are more than qualified,” she wrote to Ocasio-Cortez on Twitter. “I just have a degree in [business administration] and have owned a construction company for 20 years.”

Translation: “I know I have zero qualifications to engage in any debate, but I have new conspiracy theories I want to dish to all my fans out there. So let's do this.”

Naturally, AOC didn’t respond. Probably because, y’know, she’s actually trying to serve the interests of her constituents instead being a transphobic troll. Predictably though, Greene didn’t stop there, because, why the hell would she?! She continued tweeting at the New York congresswoman throughout the day and — oh God — even came up with a hashtag for the “debate.”

As Mic’s social media gal, I need to know who’s writing Greene’s tweets. It’s as if Greene herself or one of her cronies turned on predictive texting on her keyboard, selected the first words suggested to them, and then said, “Yep, this looks legit.” That’s the only plausible explanation I can come up with. How else can you explain these mind-numbingly awful tweets?

*massages temples* No, Marjorie, the only thing I see is QAnon written in between the lines:

As a fun at-home exercise for you, reader, I'd love for you to turn on predictive texting, type out some mumbo-jumbo, and ask yourself if it could be a MTG tweet. I guarantee you the answer will be yes.

But because humanity isn’t broken just yet, a bunch of Twitter users trolled Greene right back. Some people took out their red pens and schooled Greene with a lesson in grammar. “Language tip: ‘...between AOC and me…’ is correct … Your proposal, [on the other hand], calls for, well, laughter,” one user remarked. “I could be lost in the desert and still not be this thirsty,” political commentator Brian Tyler Cohen wrote about Greene’s stunt. California Rep. Eric Swalwell (D) took a swipe at Greene, too: “When you aren’t on any committees you can propose stunts like this,” referring to the congresswoman being booted off of her committee assignments earlier this year after a series of incendiary statements. Greene then responded to Swalwell with this very on-brand tweet:

The conspiracy-theory congresswoman has a special knack for keeping herself busy with saying and doing things that will earn her a FastPass to whatever’s worse than hell. Mere days after the police killing of 20-year-old Daunte Wright in Brooklyn Center, Minnesota — a state already teeming with tension as it and the rest of the country watches the Derek Chauvin murder trial — Greene introduced a bill proposing to award Congressional Gold Medals to law enforcement for “protect[ing] American cities from Black Lives Matter terrorists.”

Then you’ve got the fact that she’s trying to undermine any progress we have made on coronavirus by spewing anti-vax nonsense. And, of course, she’s quite busy defending the honor of her good ol’ friend, Florida Rep. Matt Gaetz, who’s currently being investigated by the Justice Department on allegations of sex trafficking. Really, I could go on and on and on.

Let me be perfectly clear: Theoretically, I would absolutely pay any amount to watch AOC zap and zing MTG faster than the Jewish space lasers. But practically speaking, giving someone who’s threatened the fabric of democracy and the foundations of stability a platform to spew even more utter garbage? I’ll pass.

More like this
Sure looks like Madison Cawthorn illegally snuck a tactical knife into a school
By Rafi Schwartz
Of course Amy Coney Barrett claimed SCOTUS isn't partisan
By Rafi Schwartz
Ted Cruz, you dunce, you Eddie Munster-looking nincompoop, it's time to log off
By Rafi Schwartz
Stay up to date