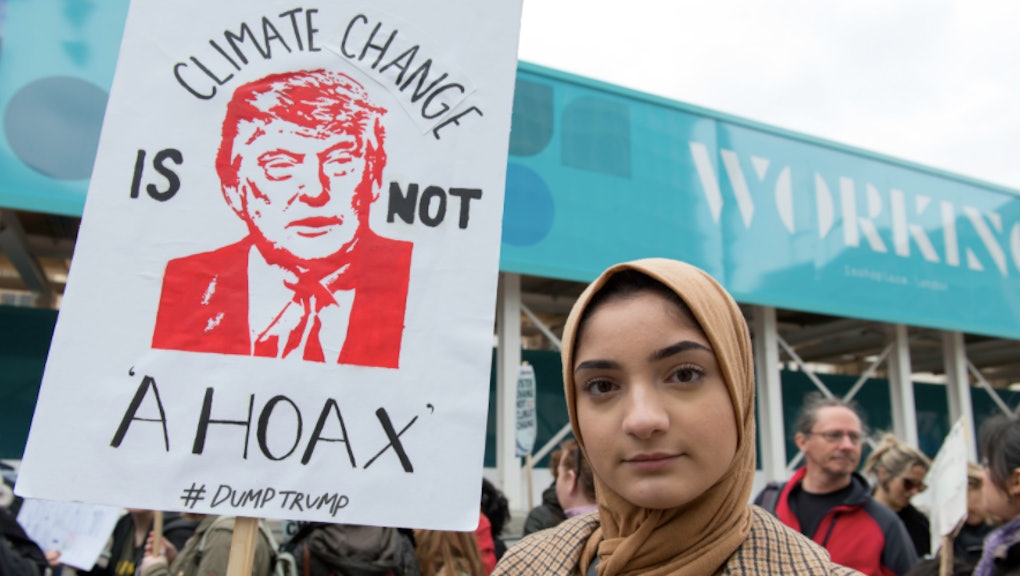 How to explain climate change to skeptical friends and family

The climate crisis has finally become an unavoidable reality, as the Earth’s changing environment becomes more and more hostile to the species living on it. Young people around the world have been diligently protesting and pushing for environmental policies that will prevent them from inheriting a volatile planet, but some people are still in denial about what’s happening around us.

Some of those people could be family members or friends, and while talking to them about these issues is important, approaching the topic can be tricky. Despite evidence that our lives are already affected by the changing climate, it has become a polarized and politicized issue just like so much else.

Here’s some good news: There are ways to have an intelligent, civilized discussion about the climate with skeptical loved ones as long as you’re willing to listen to their worries and provide them with factual information.

“Polls show 51 percent of the U.S. population is alarmed or concerned about climate change, but most of them don’t talk about climate change with their friends and family,” George Mason University research assistant professor John Cook told Yale Climate Connections (YCC). “Activating and empowering these groups is one of the most productive things we can do to achieve social momentum on climate change.”

Listen for friends and family members who might say they’ve noticed unusually hot summers, an increasing number of storms, or are shocked over the sheer amount of wildfires the nation is battling every year. These are folks who might not consider themselves climate change believers, but have noticed the environment has changed. With these people, you can connect their personal anecdotes about intensifying weather with what studies have shown about climate change.

One group to think twice about confronting are trolls itching for a fight and people neck-deep in conspiracy theories.

“Recognize the claim that ‘climate change is a hoax’ for what it is: A baseless conspiracy theory,” Sara Peach, author of the “Ask Sara” climate advice column for YCC, tells Mic. “If your friend or family member has full-on embraced this conspiracy theory, it’s going to be tough to talk them out of it. I’m very sorry.”

For friends and family who are more open to an actual talk, there are other recommendations you can follow to help them understand the importance of climate change.

Be an active listener

Talking about climate change often involves more listening (on your part) than talking. Hear the other person out, and listen to their worries about the changes to their environment.

As you listen, really get to know their concerns and what kind of information they would appreciate. Scientists have warned that climate change will impact everything in our lives, but that doesn’t mean you can pull a Donald Trump and respond to Subject A by talking about Subject C. Ask questions and try to understand what’s making them hesitate; have a good, heart-to-heart conversation.

Most importantly, be yourself while listening to them. Don’t act like a salesman, ready to shoot out your sales pitch at the mere mention of the smallest pain point. Be genuine and heartfelt about their worries as well as your own.

It’s important to have a working knowledge of the vast number of studies that have for decades warned us about climate change. When you whip out stats, use facts that are linked to the specific concerns of the person you’re talking to. If they mention they're worried about the economy, you can discuss the studies that show how climate change will affect it through property damage, changes in agriculture, and the disruption of supply chains. The situation with PG&E, the electric company found liable for sparking wildfires in California, is one example of a business failing to address the change in environment by maintaining their equipment to prevent a catastrophe from happening.

The climate emergency will impact national security, the future housing market, healthcare, systemic racism, and way more. So there’s no need to use hyperbole or over-exaggerate claims to the point of turning legit information false. If you don’t know much about a topic, offer to look up information for your friend or family member. They might appreciate your helpfulness, too.

Facts are good, but some people might be more swayed by personal stories. If you don’t have any of your own, there’s no shortage of publicly available ones to pull from.

Talk about the woman in Oregon who had to make the choice to leave her injured mother behind as the family was forced to flee the wildfires on foot.

Tell them about the indigenous Alaskans whose lives have been disrupted due to the warming temperatures.

Discuss the mental health impacts the ever-increasing and intensifying disasters are having on so many.

If words are failing you, try arranging a movie night with a nature documentary; it can help put pictures to words and explain scientific findings to people who may be more visual learners.

According to the Pew Research Center, nearly two-thirds of Americans believe the federal government could do more about climate change, that the environment should be a top priority, and that strict environmental regulations are worth the potential cost. However, depending on where you live, there still might be people who don’t feel like it’s an urgent matter. Someone living on the burning West Coast, for example, might believe we’re getting hit with a climate crisis more than someone in the Midwest.

We’re going through a year where we’re running out of names for tropical storms and wildfires continue to burn at unprecedented rates. Use current examples like these to help the person understand that climate change isn’t in the past or the future — it’s literally now.

Don’t spew false claims — even if the other side does

Again, don’t make up information. If you don’t know much about a topic, offer to look up some studies or articles. Try to refrain from exaggerating claims or relying on too much hyperbole. The climate crisis is real and dangerous enough on its own. False claims will only become used as ammunition against you.

Yes, it sucks that a lot of deniers use misinformation to dissuade people from taking climate change seriously. But don’t fall into a trap that will make people question your honesty.

Don’t get pulled into a screaming match

For the love of god, do not get into a yelling match with a climate change denier.

There is absolutely nothing productive about arguing with a troll. As mentioned above, people who are strictly adherent to party lines, neck-deep in conspiracy theories, or want to say things just to rile others up are, frankly, a waste of time. Worse yet, your bombastic reaction to their nuclear explosion might make people think you’re equally unhinged.

If you somehow end up getting dragged into a conversation with a person like this, try to remove yourself as calmly as you can.

“I would do nothing more than murmur, ‘It sounds like someone has given you some information that is not correct,’ and then extricate yourself from the conversation as quickly as possible,” says Peach. “Then put your life’s precious time and energy to better use.”

In fact, that precious time and energy can be spent showing your friends and family that you’re committed to making a change for a better environment by adjusting your own behavior. There’s no better way to show how serious the climate crisis is than by making active choices to reduce your carbon footprint and push for corporations to do the same.

“I recommend finding another person in your life who is worried about the climate and joining forces to work on the problem together,” Peach tells Mic. “Such people are probably all around you[.]”

When your friends and family members see you buying reusable products, tracking carbon emissions, reducing your waste (including plastic waste), switching to an electric vehicle, or taking part in the fight to demand global leaders take climate change seriously, then perhaps they’ll be inspired to follow suit.

This article was originally published on Oct. 8, 2020

More like this
Amid daily reports of catastrophe, Americans are finally starting to realize climate change is bad
By AJ Dellinger
Plastic Free July is the perfect opportunity to kick our pandemic habits
By AJ Dellinger
Heat waves are killing baby birds by forcing them to flee their nests before they can fly
By AJ Dellinger
Stay up to date